It has been said that the one organization that no one would ever want to be able to join is the American Gold Star Mothers, the organization of women who have lost children in combat. Granted a Federal Charter by the ninety-eighth Congress (1929) this organization of American mothers continues to change, grow, and be there when needed.

Georgie herself resisted joining the organization of “weepy women” as she once called them. But, her respect for this organization of “tough old gals” (as she now calls them) grew.  After joining it (1976), she gave it her energy and dedication,  eventually serving as president of her local (Miami) chapter and as National President (2001-2002).  She continues to be active in the organization at all levels. 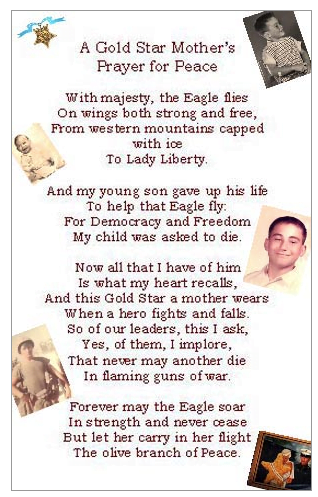 ~ Only God knows the amount of their tears… and toughness ~

Meetings are held the last Saturday of the month at 11:00.

We are always looking for “More New Members” to join our ranks. Please leave your name and a phone number for a call back.